In Dungeons and Dragons 5e, most DMs and players have become familiar with “the” two leveling systems through community osmosis: Experience Point Leveling, and Milestone Leveling. This perception has been warped and skewed over time, like a giant game of telephone from one dungeon master on a reddit thread or youtube series to new DMs, etc.

If we actually take a look at the DMG, you’ll notice that it considers “Milestones” as a supplement to ExP leveling, not a replacement, and considers that DMs should assign EXP to significant milestones in addition to granting EXP normally. The community has crafted plenty of ways to write experience out of this–relying on “checkmarks” instead of numbers, etc… but it still becomes a hassle to keep track of, and can lead to strange and inconsistent leveling. Many DMs have quietly avoided these options altogether and just level when it “feels right” or when players inevitably ask. This can make players feel like their actions don’t matter, or that it’s only arbitrary when they do.

However, if we take yet another look at the DMG, we’ll see two written options that already knock (most) number tracking out of the equation: 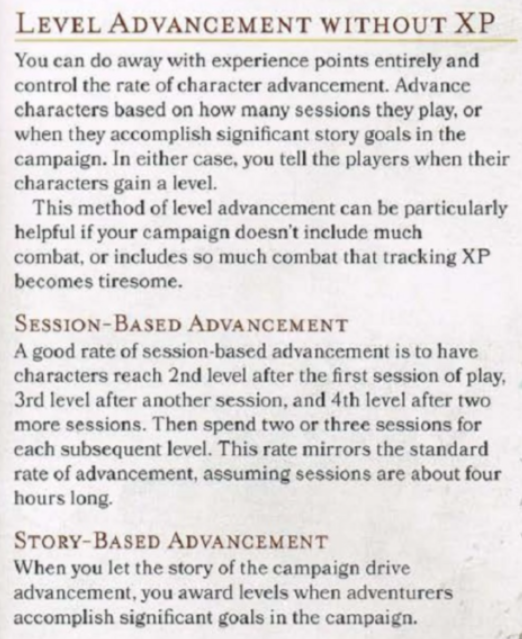 Many are somewhat familiar with Story-Based-Advancement, as it gets conflated with Milestone leveling often… But it may still lead to inconsistencies. What if you, as a DM, aren’t sure when the big story beats will happen yet? How do you pace them correctly? This is where I want to look at Session Based Advancement, an option I see consistently slept on.

Session-Based Advancement is the core idea behind my own leveling system. It’s description in the DMG, however, is vague–and still assumes players are seeing lots of combat, and that you plan to have them level extremely quickly. Thus, I introduce…

The TLS bases itself vaguely on the idea of associating play time with how many levels are gained, with levels being gained exponentially based on how many (approximately 4 hour long) sessions the players complete, as well as a few other prerequisites. In this way, it’s a bit like the tossed-around-idea of “milestone” leveling, but far easier to keep track of and keep consistent. It enforces the idea that players and characters are always learning, even passively.

This system encourages you to create a one-time leveling “map” that you’ll continue to use for the rest of your campaign. (Don’t worry! It can definitely be modified along the way.) There are a few ways to modify and create your own leveling “map” based on this system… But instead of speaking in hypotheticals, I’ll just show you one of my own first, and explain my rationale in a follow-up.

So, with that out of the way, let’s talk about the why.

This level map assumes that, in a campaign lasting from level 1 to level 20, there will be at least 78 total sessions. This, to me, seems vaguely in-line with many dnd groups who rely on other leveling methods: meaning that if players consistently meet four times a month with no breaks, they will reach level 20 in about two years real time. More realistically–if players meet only 2.5 times a month, it’ll take them about two and a half years, minimum. (This is still being generous with how often you find time to play.)

The combat prerequisite exists, not to pad out time between levels, but to ensure all players are comfortable in their current levels before gaining more abilities. As levels get higher, players acquire more spells and abilities, and they should be comfortable with most if not all of them before tacking on more. You don’t want your players to become overwhelmed; progressing levels too quickly can actually be a detriment to play. Ideally, you should be having combat more often than I have listed in my level map, but I also understand that not all campaigns, and not all abilities, are combat-focused. If you still think your players need additional time with their enhancements, though, wait to level them up, regardless.

Lastly are the story milestone prerequisites. These are optional, but might be a good idea for your level map. These barriers are inspired by the Tiers of Play discussed in the Player's Handbook (pg.15). The PHB described four tiers, ranging the levels 1-4, 5-10, 11-16, and 17-20. There are no hard rules associated with these tiers. They are simply the milestones at which player characters begin to feel different to play, and the tiers in which D&D 5e begins to feel like a different game. To give a balanced experience, I think it’s cool for the players to accomplish at least one major thing in each of these tiers, to really get a well-rounded experience from the game.

Lastly, this level-map is a loose guideline, not a rule. If you’ve met all the prerequisites for a level-up after a session where the players did nothing but shop, and you know it would be more impactful and fun for them to level up at the end of the next session after they face the Big Bad–hold off on it! Are you really close to your players reaching level 12, but they just wrapped up an incredible plot point or story arc? Give them a level a bit early as a reward. If you find you're leveling too fast or two slow, modify your map. It doesn’t have to stay the same!

I hope this guide helps you find a stable and easier way to keep track of levels in your campaign! Feel free to make your own level map, or steal mine, and keep it as a checklist. Leveling is something I struggled with consistently before making this system, and I find it much easier to cross off requirements after each session than trying to come up and add things as I go. Feel free to use as much or as little of this as you want, and happy DMing.